We are a group of people from Brno (CZ), who are not happy about the conditions for alternative transportation in our city and who want to do something about it. Our power is limited to discussion with our City Council and organizing of cycling rides throughout the downtown to make cyclists more visible there. We held an annual critical mass on the Earth Day in April and in the Car Free Day in September, apart from short rides around the city center done every week except for the winter.

What do we propose?

We prefer rather small achievable goals to the utopic ones. We want the pedestrians, cyclists and motorists to have an equal chance to share the public space. We would appreciate mutual tolerance and acceptance rather than someone’s exclusion.

The ideal city would enable an alternative wherever there is a transportation need. As the public transport cannot reach every single place or street, for it would require too much space and finance, the individual alternative should be accessible.

Where the traffic is rather local, the may be the speed limit pushed to 30kph to make cars as fast as bicycles there, which would prevent many conflicts. The traffic at this speed is much more fluent, saves fuel and minimalise severe injures. Where possible, cyclists should be able to use the one-way streets in both ways. Eventually the first street like this appeared in Brno last year. 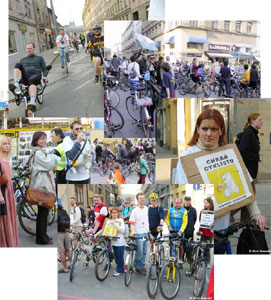 The streets with higher traffic cannot be safely shared without some level of separation done either through cycling lines along the road or separated paths where necessary. These may be combined with pavements as it is mostly done in Brno, but it requires higher attention paid by cyclists and pedestrians as well.

The pedestrian zones in Brno’s downtown are free for cyclists only from 5p.m. till 9a.m., so that if a cyclists want to go shopping there, they have a chance between 5p.m. and 6p.m. Some streets may be accessible all the day if there is a line for cyclists in the middle. If someone wants to cycling around this closed area, they can use three very busy, often jammed roads. The trouble is that most of the cycling paths lead to such a busy street, where you can choose between a pavement full of people and road full of cars. Would one meter for cyclists be such a problem?

What we do know is that MONEY IS NOT THE PROBLEM. Our City Council has annual amount of 18millions CZK (=600 000 EUR) for cycling infrastructure available, still in some years only a small portion was invested. Klub Bicybo obtains 5500 CZK a year. Our proposals are not expensive or difficult to be realized, but maybe the grater project, the higher chance of its realization.

The will to change things is not present. As prospective teacher I thing that schools should take a partial responsibility for better future and thus motivate and enable the youngest generation to cycle to school. Hopefully they would keep on when going to work having fun of those who have to earn a lot of money to buy a car, spend hours taking a care of it, spend long minutes in traffic jams and in vain search for the parking place.